One of the most widely used devices for streaming only exclusive movies and TV shows is the Amazon Fire TV Stick. Does a Firestick require internet access?

Without a Wi-Fi network, an Amazon Fire TV Stick cannot be used. To stream content to your television, a Fire TV Stick needs a network. Having said that, there are some things you can do if you already own a Fire TV Stick and don’t have high-speed internet.

How Does Firestick Works?

As we’ve previously stated, the Amazon Fire TV Stick requires a reliable internet connection to function properly. All of the media content available through Amazon Prime is streamed from the internet, including movies, TV shows, and music. You can only use installed apps that don’t need an internet connection without connection. There are no controls or alternative options, so even that will be restricted.

Do You Need Internet For Firestick?

The Amazon Fire TV Stick is primarily used for streaming movies and TV shows, which calls for a high-speed internet connection. Despite the fact that you can still access all of your Firestick’s apps without a connection to the internet, only a select few of them—like Kodi and some games—can be used offline.

Firesticks can only connect to the internet using Wi-Fi without any additional hardware. They lack an integrated ethernet port, in contrast to some other streaming devices.

Having said that, you can connect your Firestick directly to your router by purchasing an ethernet adaptor from Amazon. I’d advise purchasing one if your Wi-Fi is sluggish or unreliable.

How To Connect A Firestick To A Hotspot?

You could connect Firestick to a mobile hotspot if your Wi-Fi network is down. It’s not a particularly effective long-term fix, though.

Use WiFi or an ethernet connection instead. If you do find yourself on a hotspot, I advise staying away from HD streaming unless you have an unlimited data plan without data throttling. 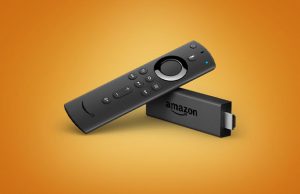 Things To Do With A Fire TV Stick Without Wi-fi

Without a home Wi-Fi connection, it may seem pointless to try to use your Fire Stick, but there are still some things you can do with it. In fact, you might be surprised.

Although there are still some pre-installed apps that allow you to watch content, as was already mentioned, there aren’t many of them.

There are additional things you can do with your Fire TV Stick even if you don’t have an internet connection, in addition to what is listed below. For example, you can use it to connect to a projector, for which we have detailed instructions.

Use Kodi With A Fire Stick

Popular content streaming service Kodi is compatible with Fire TV Stick. Installing the app and its content on your Fire Stick is simple. Following installation, you can watch Kodi’s movies and shows as they are downloaded.

You can watch the content you’ve downloaded offline, but you can’t use Kodi’s online library if you don’t have an internet connection.

After being downloaded, not all games require an internet connection. You can download games onto the Fire Stick if you want to play them but don’t want to pay for WiFi.

The Fire Stick can be used to play games on your television after they have been installed. However, a game won’t function on the Fire TV Stick if it needs an internet connection to be played.

Use Other Apps Through The Fire TV Stick

You can still access some of the apps even without an internet connection, but the Prime Video home screen won’t be visible. Although there are a few steps involved, they are necessary if you want to view the included content. Use Device Settings to check your options if the app doesn’t require Wi-Fi.

Even though the procedures are straightforward, you will only have access to content and apps that don’t require an internet connection.

Use A Hot Spot

You probably own at least one piece of equipment that can serve as a hot spot. If you don’t have the specialized tools, your smartphone will still function.

You can easily use your mobile device to connect your Fire TV Stick to the internet and gain access to all of the included films, television programs, and games.

You’ll have access to all of the streaming content once the connection between your phone and the Fire TV Stick is made. One thing needs to be kept in mind. By choosing Amazon Tap, you grant the Fire Stick access to your phone’s data, which may increase your monthly bill.

It’s a good idea to learn about your data usage restrictions before using your mobile device as a Wi-Fi hotspot for a Fire Stick.

Since some retailers, but not all of them will allow you to increase the GB on your phone plan, you’ll also want to find out how much it costs to go over your data plan. To put it another way, installing Wi-Fi throughout the house might actually be less expensive.

For families without internet access and with children, FreeTime Unlimited is an affordable annual subscription service. Children and adults alike can read books online, play games, and watch movies that they’ve previously downloaded.

If you don’t have Wi-Fi, you’ll need to set one up or activate your existing one in order to download the files. You can turn off your internet connection after the installation is finished.

You must have a Miracast-capable device in order to screen mirror content from your phone to the Fire TV Stick. For instance, if you’re watching a movie on your Apple device, you can send the content to the connected television.

Only a select group of mobile devices, primarily those running Android 4.2 and higher, are compatible with Miracast. You should keep an eye out for overage charges because you are also using the phone’s Wi-Fi data.

Simply put, it’s very likely that using data will cost more than just using Wi-Fi. In light of all of this, it’s important to note that an Amazon Fire TV Stick can be used without an internet connection, but it’s going to function much better with one since you’ll have access to a much wider variety of media and games.