A blender is one of the most convenient appliances that many people take for granted. Many blenders are quite loud, which can be annoying if you’re sensitive to noise or don’t want to disturb the rest of the house while you’re prepping something. But why is it so? Do all blenders make noise, or is your blender faulty? Luckily, most of the factors that cause your blender to rattle are simple and easy to repair or suppress. If you’re confused about any of these questions, we’ll answer them. We’ve listed possible causes and solutions for your blender noise; let’s take a look.

If your blender was quiet when you first got it and seems to have gotten louder over time, you might want to check to see if any of these problems are the cause of the noise.

Most blenders have metal blades.

Blender manufacturers choose steel blades because of their ability to blend a variety of foods, even those that are hard or sticky.

The problem with steel blades or any other metal blades is that they create grinding patterns in the motor.

The back-and-forth movement of the metal blade can also damage components in the motor, which can make a lot of noise that can eventually damage the blender and stop it from working.

It can also cause serious problems when the metal blade wears out and begins to deform.

If they are misshapen, they may rub against other parts of the blender or make more noise when they come into contact with certain foods that are being mixed.

Many older blenders have loud motors.

Sometimes the blender can be very loud because of a problem with its motor.

If the blender has been used for several years, the damage may be due to normal wear and tear.

The blender uses an electromagnet to spin the blades.

The faster or coarser the blending speed, the more times the blender works, and the stronger the magnet.

Strong magnets mean more noise when parts are close to each other.

If the engine starts to wear out or damage, there may be fragments rubbing against each other, or more friction between the fragments, making the sound of the movement clearer. 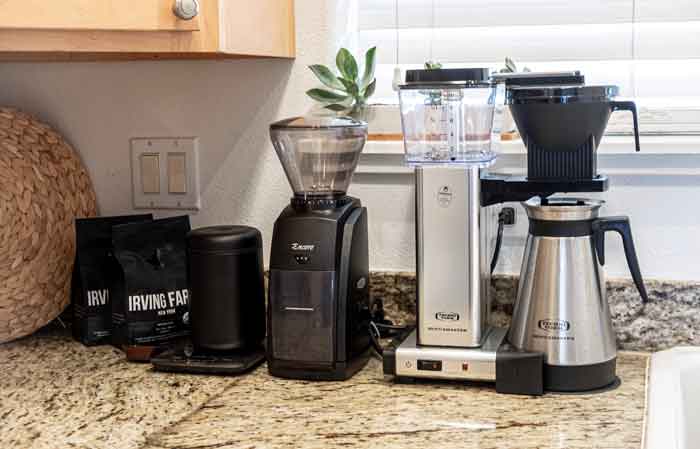 Most high-quality blenders are designed to be quieter.

The motors run smoother and are more durable, so they’re less likely to have trouble mixing certain foods.

If the mixer is very loud, it may be due to poor quality.

A lower-quality blender is more likely to be built with lower-priced parts that don’t hold up, bend, or break easily, causing problems with the motor and rubbing against other mechanical parts.

The parts of a better quality blender are made of stronger materials and won’t be easily damaged or deformed.

They don’t rub against other parts, stay lubricated and run smoothly, and their shape makes moving parts more aerodynamic, so there’s less wind resistance and noise when they move or spin.

When the blender is running, a lot of things move in and out.

A blender has a lot of parts, and when the motor is included, there are a lot of other parts that can come loose and get stuck in the blades or even fall into the motor.

When the mixer is running and vibrating, loose parts can move around.

The more loose parts, the louder the sound.

Loose parts can eventually vibrate and shake so much that they fall, rendering the blender inoperable.

Blenders are easy to assemble, and many of them are ready to use.

Those that do require assembly may have some small parts. The motor and base of the blender will be one piece, and the pitcher and lid will be separate.

Some blenders also have double lids, so you can pull up a small portion of the lid to add food or liquids while the blender is working without removing the entire lid to avoid getting dirty.

If any of these parts are not installed or connected properly, they will vibrate, rattle, and make loud noises while the blender is running.

Noise can occur in the kitchen or areas of the home where the blender is stored.

Blenders do make noise, and the spread of that noise depends on the design of the home or the setup of the kitchen.

If the blender is placed under a cabinet, the noise may reverberate in the home.

If the blender is on a metal or wooden stand, it may vibrate and make noise while running.

If the blender is close to other appliances, it may vibrate or shake when running, and it may make noise.

Occasionally, the vibrating sounds the blender makes when it is running appear to come from inside the blender, even though they are actually the result of the blender moving on or against a hard surface.

Things break easily in a blender.

Lids, fasteners, blades, screws, and even small pieces of plastic around the base of the blender can all be ajar or broken.

When these parts are not where they should be, it can cause problems with the entire device.

It can allow more movement, incorrect movement, and put pressure on the motor, making the blender noisier.

A blender with damaged operating parts can also be dangerous.

It could overheat, catch fire, or even cause an electric shock.

Sometimes it can be difficult to tell if a part is damaged, especially if the part is contained within the motor housing or blender base.

Most people don’t take the time to check their blender, and if they think something is broken, they don’t try to fix it. 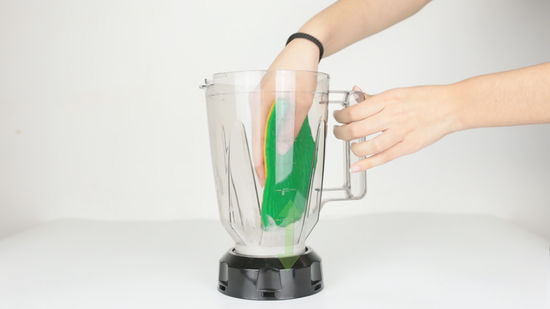 The blender must be cleaned after each use.

If not cleaned properly, food particles can get stuck in the motor or around the blades.

Even fluids that are not properly flushed and removed can become vicious, causing corrosion or preventing moving parts from spinning the way they should.

Anything that hinders the blade from moving or makes it harder to move can cause problems.

This is likely to stress the motor or cause the blades to rub against other parts of the mixer.

You may be planning to use your blender to mix and combine a lot of different things, but there are some things that shouldn’t go in a blender.

Just because a blender can mix these things doesn’t mean they don’t take a toll on the blades and motor.

If the motor has to be strained to mix something too big or heavy, the motor will have to work harder and it will be noisier.

Grinding, metal rubbing, growling, or any mechanical clicking or noise is a sign that the blender is moving the blades hard.

Eventually, the motor will overheat and stop working completely.

It is understood that some blenders caught fire because the motor was over tensioned and the motor overheated too quickly, resulting in an electrical fire.

The blender sometimes has to move at very high speeds in order to mix the food.

The finer the blend or blend, the longer and faster the blender will run.

It takes a lot of work for the motor to spin the blades at such a high feed.

The resistance between the blender blades and the food can also create noise.

Hard foods like ice, frozen fruit, or any solids make noise when the blade is attached to them, trying to break them down or puree them.

The higher the stirring speed, the harder or thicker the food, and the louder the noise will be.

How Do You Make A Blender Run More Quietly? 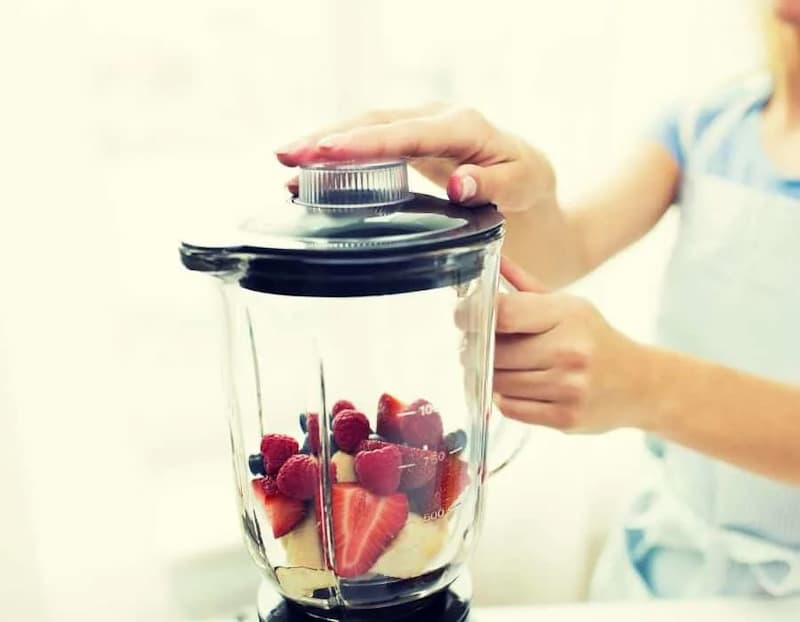 If your blender is too loud to handle, don’t lose hope, as there are a few more ways to get you through it. Here are some tips that can help you make your blender quieter:

When the blender is placed on an uneven surface, it hits it and makes an echo. So start placing the mixer on a stable surface, like a granite countertop or a stable wood floor.

Cushioning the surface under the mixer will reduce its sound and vibration. If your blender normally sits on a hollow or thin surface, try placing a pad underneath.

Use a silicone pad, kitchen towel, or cotton cloth to absorb noise from the blender.

But remember, don’t block the blender’s ventilation while doing this. Obstructed ventilation can overheat the blender and reduce its ability to work.

If your blender is surrounded by hard surfaces, like the countertop below it and surrounding walls, running it can create a lot of echoes.

Move the mixer away from the wall and surround it with a soft surface like cardboard or a silicone pad to reduce echoes.

The blender sometimes makes an unbelievably loud noise. If your mixer is of poor quality or has been used for many years, its bearings will weaken and make a lot of noise.

The main reason the blender makes such a disturbing sound is its rotational speed, which makes its motor do a lot of work in a short amount of time.

If the blades of the blender are worn, friction occurs, which makes noise. But you can overcome this problem when you place the blender on a research surface and use an absorbent material like a silicone pad.

Use earplugs to protect your hearing, and keep away from the blender if it is too loud. If any of the reasons we’ve listed above don’t hold, check with your blender manufacturer to find out what they think about it.

Sometimes the only problem with an appliance is how long it stays in the home. Premium blenders are quieter and easier to operate; if you have the budget, get a better unit.